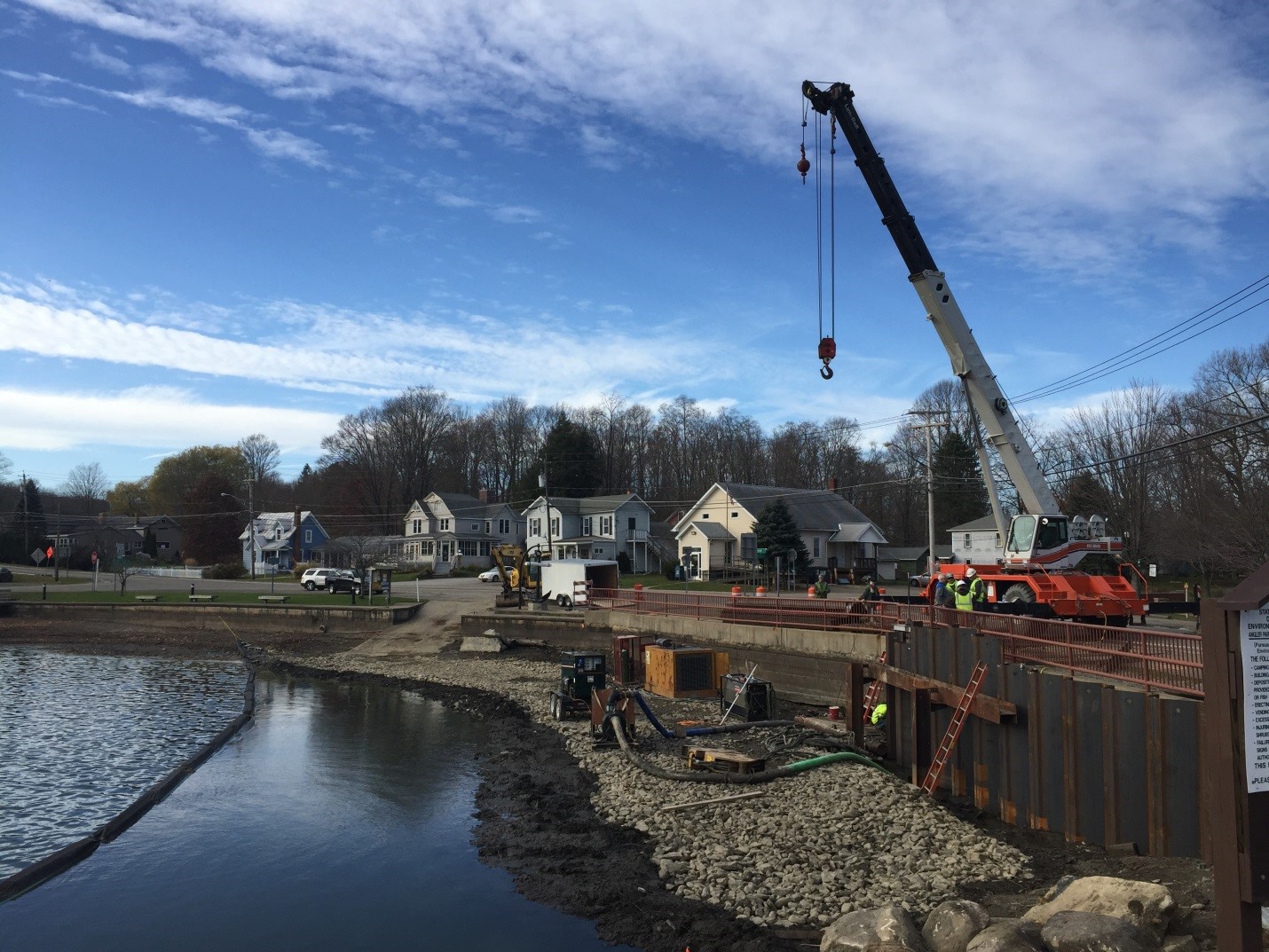 The resources available from the 2% Occupancy Tax for Lakes and Waterways have facilitated the planning, design and construction of significant public infrastructure in Chautauqua County.  One recent example is the rehabilitation of the Findley Lake Dam.  The original structure dated back to the 1800s and was in serious need of repair.  Grants from the 2% Occupancy Tax Program provided approximately $200,000 to fund a feasibility analysis, final engineering design and cost-share for the construction of the nearly $600,000 project.  Below is a photograph of the project during construction.

The Northern Chautauqua County Regional Water System provides drinking water to over 12,000 Chautauqua County residents.  The raw water intake for the system is in Dunkirk Harbor on Lake Erie.  The seawall that protects the raw water intake and Water Filtration Plant had sustained storm damage and was in danger of failing.  The solution was to stabilize the seawall with heavy limestone armor.  Funding from the 2% Occupancy Tax Program provided $100,000 to preserve this vital piece of public infrastructure on Lake Erie.

The Jamestown Riverwalk Trail System follows the Chautauqua Lake Outlet (aka Chadakoin River) through the City of Jamestown.  This urban riparian corridor is a refuge for many bird, fish and reptile species.  Parts of the trail in close proximity to the water’s edge were being threatened by erosion.  Grant funds from the 2% Occupancy Tax Grant Program were used to stabilize eroding areas, plant native vegetation and improve habitats for species such as the Eastern Spiny Softshell Turtle.

Chautauqua County is fortunate to have three Federal Harbors of Refuge on the Great Lakes – Saint Lawrence Navigation System, which is the longest freshwater navigation system in the world.  Periodic dredging is required to maintain the functionality of our harbors.  The above photograph depicts the recent dredging of the Dunkirk Harbor.  Our harbors in Barcelona, Dunkirk and Hanover each have municipally-owned and operated boat launches that are available for recreational boaters and fishing charter boats.  Chautauqua County has utilized $200,000 from the 2% Occupancy Tax Program for dredging to assure the continued functionality of our harbor infrastructure.